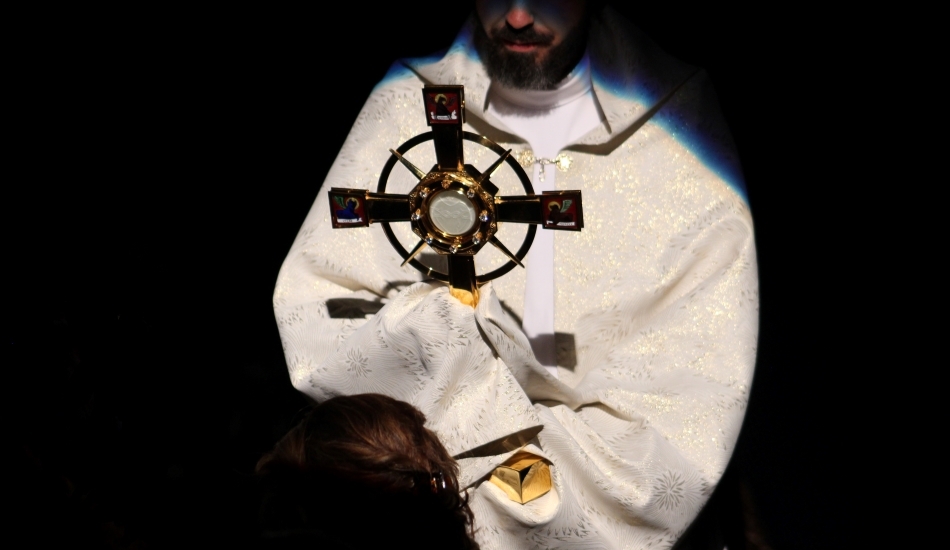 Have you ever imagined what it would have been like to walk with Christ while He lived on this earth? What would His voice sound like? What would He look like? Would you believe it if I told you He walks among us today?

I will provide some backstory. During this past time of Advent 2021, while living in the Resi (a Catholic residence for young women) in Jacksonville, Florida, we went to an adoration night hosted by a group of religious Sisters. During adoration, we prayed the rosary, and then there was time for silent prayer before Our Lord and music.

Something very special happened that night. Before benediction, the parish priest took Jesus in the monstrance and began to process around the church along with two altar servers. Now, this was not the first time I had seen a Eucharistic procession; nonetheless, this time was different. There were not a lot of people there, and Father said, “If you wish to reach out to Our Lord or get closer, move to an aisle seat.” So I did just that. Actually, I didn’t even go to a seat, I just went to the isle and knelt down on the floor, in anticipation for Jesus to pass by. In that moment, I prayed and asked Jesus to look at me with love, as a groom would look at his bride.

Father, who was carrying the monstrance, was stopping at each person, so Jesus and that person could exchange a look of love. As he was coming towards me, my heart started to beat fast, and I felt anxious, like how someone would feel on their wedding day. When Jesus was finally in front of me, I looked at Him, and He looked at me, a very simple exchange, but full of peace.  Father kept walking. I did not take my eyes off Jesus, though. I watched as each person took their turn with Our Lord, and I noticed something I had not noticed in the beginning: the way others look at Him. When it came to someone's turn, they looked at Jesus, and their face changed: there was sometimes a smile, peace, tears, aching, joy. You could tell that gaze between them and the Lord was real. I was struck by the reaction of one man in particular, who looked at Our Lord with radiating joy. He could not help but smile, and his eyes lit up with excitement. It made me think of what it would have been like when Jesus lived on this earth. Imagine the thousands of people He encountered each day. The Gospel tells us that He healed many, but how many did He heal with a simple gaze? All He needed to do was look into their eyes, with that gaze of deep love that says, “I know you, and I love you.” In that moment, all their trouble would dissipate, because they had seen the eyes of their Creator and felt His love. Just a gaze can heal. Looking into the eyes of Love Himself, disguised as bread but truly present, how could you not be healed? Is He not the same yesterday, today, and forever?

I felt like I was back in the time of Jesus, witnessing His ministry and seeing His miracles, as I looked at the face of each person, of each soul encountering her creator that night. Jesus was there that night. He was there just as He was walking on the earth 2000+ years ago. He walked through that room and healed. I have no doubt that each person who gazed upon Him on earth then, and each person who gazes upon Him now, is healed. Will you allow His gaze to penetrate you, change you, and heal you?