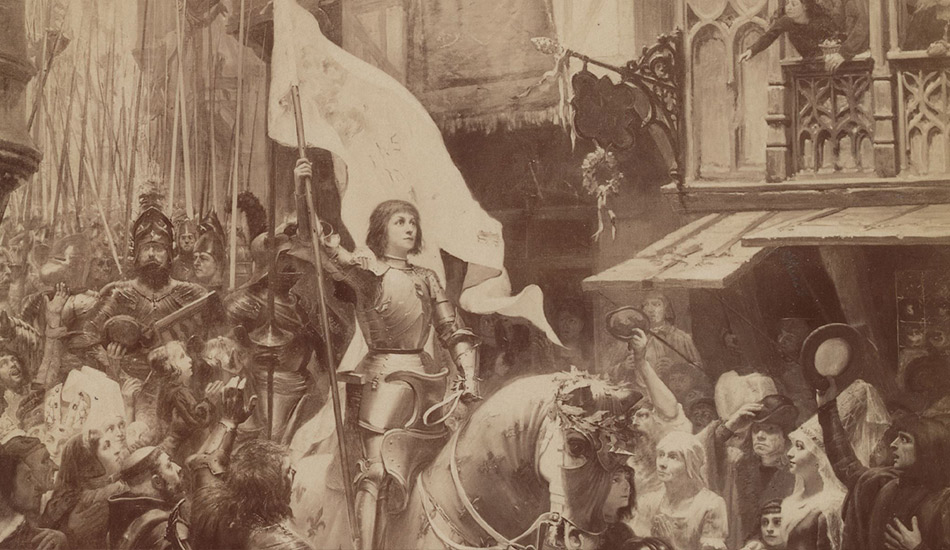 St. Joan of Arc, Martyr of the Truth

I just read a book titled St. Joan of Arc: queen, virgin, martyr. First documentary study in Spanish in light of her processes, by Marie de la Sagesse Sequeiros, SJM. This book is a magnificent study on the life of Joan of Arc and her divine mission to emphasize the right of Christ's reign upon the nations and to bring about the liberation of France from the English invasion in just three years.

Joan of Arc undertook her enterprise at the age of 16 and went on to lead an army of more than 10,000 men. The French people hailed her as "Jeanne, la Pucelle"—which means "the little virgin"—seeing in her the maiden God would send to free their people in fulfilment of an ancient prophecy. God sent her to crown the rightful heir to the throne, Charles VII, king of France. She did so and God blessed all her undertakings. But, because of political interests, Joan was betrayed by her own and delivered into the hands of the English, who, after an unjust trial, burned her as a heretic on May 30, 1431.

Her trial was carried out under the guise of an ecclesiastical trial of bishops, priests and theologians. However, the condemnation was decided beforehand: Joan was to be burned as a heretic and a witch. Why? To discredit her and to say that, instead of being sent by God, Joan invoked demons. That way, the English could deny the divine intervention that confirmed Charles VII as the legitimate heir to the throne of France. The trial was a breach of all legality, with the triumph of the political motives and not carried out in justice or in search for truth and God’s glory. Joan's enemies’ version of the story was spread as true, and for 500 years her name, honor and mission were defamed, proliferating numerous black legends about her person.

However, the truth triumphs and after five centuries Joan of Arc’s holiness was confirmed by the Church after a long process of study on her cause. On May 16, 1920, she was canonized. Throughout her life—and especially during the months of her captivity, the condemnation process and her torture at the stake—Joan showed her holiness and her fidelity to God. Throughout the five months of the process, which were full of physical torture, psychological abuse, spiritual blackmail, situations that attempted against her virginal purity, which she managed to preserve, they could not make her say any heresy nor find in her answers any doctrinal error or sin against the Faith for which they could justify a death sentence as a heretic at the stake. Therefore, they resorted to lies and falsifications.

What to make of this? It reminds of that well-known popular couplet of the Spanish poet, Blessed Father Diego José de Cádiz, who says:

«Qualified knowledge
is that man in grace ends.
Because at the end of the day,
he who is saved, knows;
and he who is not, knows nothing.»

It took 500 years for the Church to recognize the innocence and holiness of a 19-year-old girl who came from God; 500 years to recognize the wickedness and unjust judgment of those who condemned her. But the fact that during these centuries the truth about Joan was not recognized does not mean that her sanctity was not true in those moments of her trial. Although she died as a heretic, idolater, and schismatic, God knew her unwavering fidelity to his will. Since then, she has been enjoying in Heaven the merits she deserved for being faithful to God during her life. She reached the victory. She reached the goal. And no one, no matter how hard they try to defame her, will be able to take that glory away from her. "At the end of the journey, he who is saved, knows."

And what about her wicked judges, where will they be now? Only God knows, for He alone knows the depths of man's heart. God-willing they repented of their sins before they died. We have to pray for their souls. In the event that they did not repent, where would they be now? What good would it have done them to have such a good reputation in life, covering up their crime, staining Joan's honor, going unpunished by human justice and persisting in their sin until death? None at all. ‘He who is not saved knows nothing.’ The Lord in the Gospel of St. Luke tells us, "For what does it profit a man to gain the whole world if he is lost and condemned?” (Luke 9:25).

"Forever." We fail to understand the gravity and seriousness of the statement, "forever." "Forever" means that it never ends, that it has no end, that it is perpetual. And if I am in the bliss of Heaven, thank you, Lord, for your mercy! But, if I am in the eternal fires of Hell, why was I so foolish as to do what I did? "Forever." Our deeds have eternal value. Our good deeds have eternal value. Our sins have eternal value. How much money would they have to give you here on earth for you to decide to go to Hell forever? Now it would be very foolish of anyone to accept money—something finite, something that runs out—in exchange for eternal punishment. However, in reality, we are often that foolish. We prefer the short pleasure of sin to the eternal bliss of Heaven, and we choose the eternal pains, torments and sufferings of hell.

St. Joan, help us to understand that:

«Qualified knowledge
is that man in grace ends.
Because at the end of the day,
he who is saved, knows;
and he who is not, knows nothing.»

This is what our life depends on. Help us, St. Joan, to wake up.