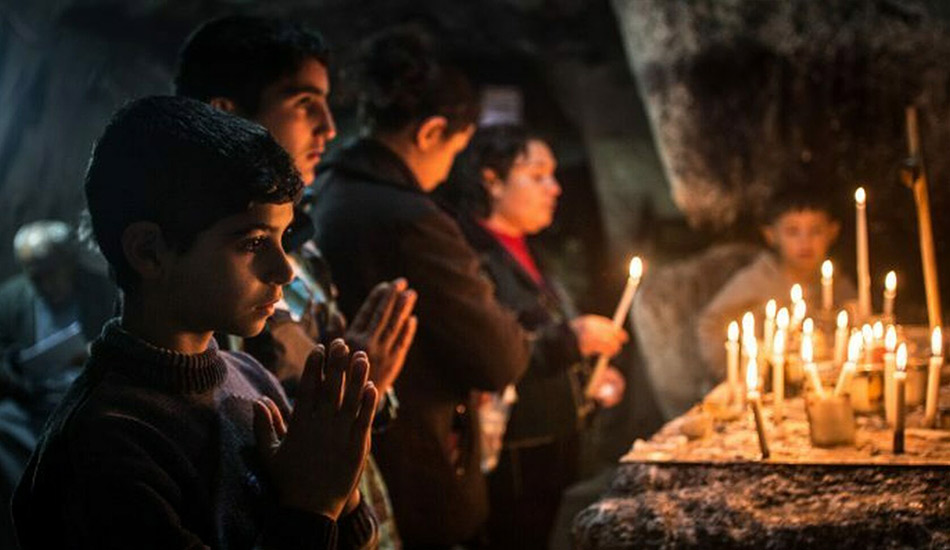 These are the Iraqi Christians

During one of the Sunday meetings that we have in the Home, in place of the usual weekly formation talk that Fr. Felix gives, we had the privilege of having an interview with Fr. Rodrigo, an IVE (Institute of the Incarnate Word) priest who has been giving his life in missions in the Middle East for many years.

Nearing the end of the meeting, he mentioned a story that I found truly impressive. A twelve-year old Iraqi girl, Christina, had made her way to church to attend the All Saints’ Day Mass with her mother, who at the time was pregnant with a baby boy. Upon arriving, Christina proceeded immediately to the altar of our Blessed Mother, to be able to speak with Her in the intimacy of her heart, and probably to pray for the safety of her mother and (as yet unborn) brother as well. Her mother, caught off-guard by the sudden absence of her daughter, glanced anxiously around to spot her amidst the throng of faces in the congregation. Her worry was well-founded, for in a place like Iraq, even a few seconds of inattention to one’s child could leave one witness to some horrendous events. However, Christina’s mother surely could not have anticipated the end of this particular incident.

Within moments, a group of armed Muslim terrorists barged into the church. They must have carefully considered and chosen that ‘opportune’ day, where Christians were sure to be packed into the church like innocent lambs in a slaughterhouse, to carry out their massacre. Of course, they could not know that their apparent victory would be the cause of Christian rejoicing on such a glorious and truly opportune day— the day of all the saints!

In the midst of the growing tumult, Christina returned, and her mother asked—echoing the Blessed Virgin’s tone of distress, when She finally discovered her Son sitting at the feet of all those doctors in the Temple— “Where were you, Christina?”

Despite the disorientating mass of moving bodies, their eyes must have locked in a gaze that conveyed more than their hurried exchange—heard by witness— could: “If you love me, Mama, don’t be afraid.”

Just then, a hail of bullets rang out. In those seconds, Christina flung herself onto her mother’s curved stomach, shielding it with her body. And then, convulsing from the bullets buried deep in her body, she lay completely motionless.

Her mother did not die. And neither did her baby brother.

Was the Child Jesus not also found in the temple, at His Father’s business, after three days? How could Christina and all the other Christian martyrs not be found in the heavenly sanctuary, for having lived, and now celebrating in fullness, "their Father’s business"— to witness to their faith?

At the end, Fr. Felix asked Fr. Rodrigo what words of wisdom he would give to Christians to in the West. Fr. Rodrigo replied that seeing the mediocrity of the Church of the West—that is, of its pastors, its religious and its lay faithful—was a blow to the Church of the East; and that he wanted to tell them to rise up from mediocrity and to know that they are on earth in order to win Heaven. Indeed, what good is it to gain the world and lose one’s soul? Let us be vigilant in guarding our hearts against the lukewarmness that so easily creeps into our relationship with God through our lack of mortification and generosity in carrying out whatever God is asking of us.

If a twelve-year old living in such antagonistic circumstances could prove with her life that teaching of Jesus, “Greater love has no one than this, than to lay down one's life for his friends” (John 15:13), then there can be no excuse for us who live in our comfortable environments to dwell in the quicksand of mediocrity. After all, our Lord told us to “Rejoice and be glad [when others revile you and persecute you and utter all kinds of evil against you falsely on my account], for your reward is great in heaven” (Matthew 5:11-12). As certain as this promise of blessing He has made to us who are faithful to Him, is the certainty that He will give us the grace to live it out.

In times of particular difficulty and temptation, we can take refuge in the mantle of Our Lady of Sorrows, who stood faithfully at the foot of the cross. Her maternal gaze will strengthen us, as it has given courage to the martyrs of the past twenty centuries, to embrace the crosses that we face each day and die to ourselves in the little things. In doing so, should the Lord call us to truly lay our lives down for others, we will be able to say “Fiat” like our Blessed Mother.

Watch the meeting with Fr. Rodrigo here (it is dubbed in English)