Have you ever wondered what the meaning of suffering is? Why does God, who is infinite goodness, allow suffering? It is a great mystery. In fact, suffering was not in God's original plan when He created the world. Everything that God created, He created good. Death, evil, and suffering entered the world through sin, when man mistrusted and turned away from God, his ultimate end and only true good. However, it is no less true that the Lord has the power to obtain a greater good even from the most painful situations. Through the passion, death, and resurrection of Jesus, suffering acquired a salvific value. What used to be a "punishment" for man's sin has become— if lived in union with Christ— a means for our salvation.

In this life, no one is exempt from suffering. Nevertheless, what really matters is how we cope with such suffering. A supernatural vision of life will help me realize that everything in this world is fleeting, and that my true homeland is Heaven. Furthermore, no matter how tough a situation may be, nothing escapes God. I have to trust in His love and power. His Providence guides my life. Therefore, I should not ask Him for explanations, nor should I rebel against Him. Rather, I should ask what He expects of me in the face of this difficulty, because, as Jesus said, “What will it profit a man if he gains the whole world but forfeits his life?” (Mt. 16, 26).

God works miracles even in the midst of suffering. He gives His grace, His love, His strength. He grants us the joy of knowing that through Him, we can participate in the redemptive work of Christ. This is what happened in the life of Blessed Chiara Luce.

Chiara Badano was born in Sassello, a small town in northern Italy, on October 29, 1971. When she was 9 years old, she met the Focolare Movement, founded by Chiara Lubich. From this moment on, her spiritual life was strengthened. She was a dynamic, sporty, friendly, and intelligent girl. After having experienced God's love, she wanted to bring it to everyone she met. Although she was a natural born leader, she did not like to attract attention to herself, because she always gave more importance to others. She defended her faith without being imposing, but rather through a genuine testimony, full of serenity and generosity.

When Chiara was 17 years old, a sharp pain in her left shoulder forced her to drop her racket to the ground while playing a tennis match. After an X-ray and an erroneous diagnosis, she was hospitalized. A subsequent test discovered an osteosarcoma, a bone cancer in its most advanced form. It was February 2, 1989.

This is how her “Way of the Cross” began. When she understood the gravity of her illness and the small chance she had of survival, she asked her mother not to say anything or ask her any questions, and she closed herself in her room. She did not cry; she did not rebel or fall into despair. She remained in absolute silence for 25 interminable minutes. It was her “Garden of Gethsemane”: half an hour of inner struggle, darkness, passion... but she never turned back. The Lord gave her His grace ... Then she came out of her room and said to her mother, “Now you can talk, Mommy.” The bright smile of always appeared once again on her face again. She said “yes” to Jesus, and she repeated it to him until the end.

During her illness, instead of praying for her healing, she abandoned herself totally in the arms of the Lord and grew more and more in union with Him. She felt totally loved by Him and wanted to respond to that love by doing His will. She wanted to “play God's game,” and she used to say, “I feel so small, and the road to travel is so arduous ... But it is the Bridegroom who is coming to meet me!” This always gave her new strength.

Her writings reflect her experiences of total intimacy with the Lord: “You cannot even imagine what my relationship with Jesus is now. I feel that God is asking me for something more, something greater... I feel enveloped in a splendid plan that little by little is revealed to me [...] I want to be up there, where everything is silence and contemplation.”

She lived her illness with deep humility and selflessness. She was completely aware of the fact that everything that happened to her, every day that passed, was a gift. She was always ready to welcome and listen to those who visited her, especially young people, of whom she would say, “Young people— they are the future. I can’t run anymore, but now would like to pass them the torch, like in the Olympics. Young people have only one life and it’s worth living it well.”

Although the cancer caused her terrible pain, she refused morphine because it took away her lucidity and, as she expressed, her pain was the only thing she had to offer Jesus. Her mother remembers one night in particular in which she had suffered in an unimaginable way. The following morning, when Chiara saw her mother, she smiled as best she could and said, “Mom, I have never had a night like this. But you know what? I didn’t waste a anything, nothing. I offered it all. I offered everything to Jesus.” Far from feeling useless, Chiara was well aware that, although she could no longer even get out of bed, she had a heart to love with— she could love everyone and pray for everyone. She transformed pain into love, offering herself with and through Abandoned Jesus.

Her father was amazed by the fact that she always had a smile on her face. He thought that perhaps Chiara made the effort to be joyful when she was with others, so that they wouldn’t suffer. One day, while passing by her room, he looked through the keyhole. Chiara was alone in the room. It was then that he realized that “Chiara was always like that.” She was always smiling, because true happiness is the fruit of self-donation, she lived a total donation to God and to others. Shortly before she died, she received from Chiara Lubich the name “Luce” (light), because in her eyes one could see “the ideal lived to the end: the light of the Holy Spirit.”

Chiara's only wish was to go to Heaven, because there she would be very, very happy. For her funeral, she asked to be dressed in a wedding gown and prepared the Liturgy for her “Mass.” She insisted that no one should cry, but sing loudly and celebrate, because she was already going to be with Jesus. She died at 4:10 am on Sunday, October 7, 1990. Shortly before expiring, she had whispered her last goodbye to her mother with a recommendation: “Be happy, because I am!”

Most likely, the Lord will not ask you to live an illness such as Chiara’s, but at some point, you will surely experience suffering in your life. Do not forget that, with the cross, the Lord also gives us strength. Unite yourself to Him; offer everything to Him. Suffering, if lived well, helps us to mature and grow both on a human and spiritual level. Once it passes, we can help others live situations similar to those we have gone through. So, in difficult moments, remember that there is nothing that can keep you from loving and saving souls. Do not think too much about yourself, and, as Chiara Luce would say: love all, love always, love first. 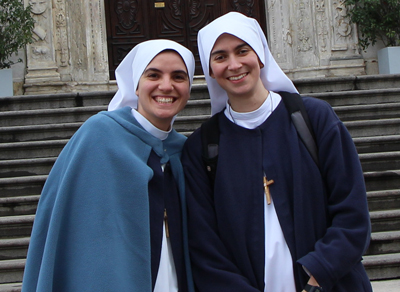 Hello! I am Sister Mariam Samino and I have been a Servant Sister of the Home of the Mother since 2011. I am the oldest of six siblings. My parents have always educated us in the faith, although ever since I was very young I preferred the world and didn't like to pray. As a teenager, I rebelled against God because it seemed to me that for Him everything I wanted to do was wrong: I just wanted to be like everyone else, so I chose to live my life without Him. When I was 18, I had a personal encounter with Jesus in which I experienced His mercy and that He had been waiting for me. I cannot cease to thank Him for everything He has done in my life, and I hope that my union with Him will continue to grow and intensify every day.

I am Sister Cecilia Boccardo. When I was little, I had a great sensitivity to the things of God, but as the years went by, I came to believe that God was actually very far from me, until I experienced His personal love for me when I was 14 years old. This marked me so deeply that from then on I could never doubt Him or His love. This thirst for God grew in me until I understood that He was calling me to respond to His love with a total gift of self. Even so, I continued living a "double life" until I met the Home of the Mother at the University, and I understood that I had found my family, my way to Heaven. I entered as a Servant Sister in 2008, and I can only thank the Lord and Our Blessed Mother for having chosen me.