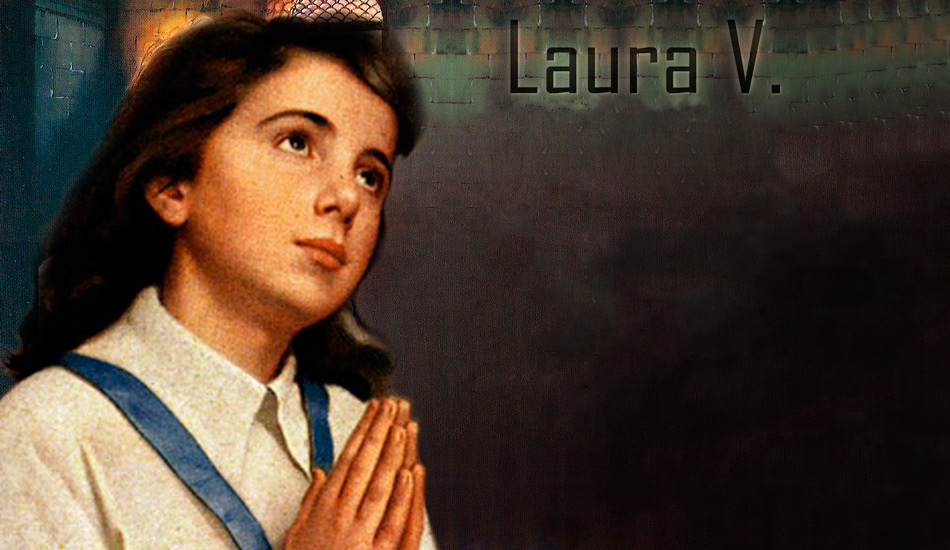 Preadolescence and adolescence… the youth are so broken nowadays, and they value what destroys us instead of exalting what gives us life: God. Who says living close to God is impossible during this phase, and that the Faith is something proper to the elderly? Whoever defends this stance does so because he or she isn’t familiar with God’s love and hasn’t heard of the lives of the saints who wore themselves out for the salvation of souls during their adolescence. Today I want to tell you that, though it’s true that holiness cannot be improvised, it’s also true that your young age doesn’t excuse you from becoming a saint. Blessed Laura Vicuña is an example for us all; she only needed 13 years to become holy.

Laura didn’t have it easy growing up. She was born in Chile on April 5, 1891, and when she was just two years old, her father passed away. She and her mother had to emigrate to La Pampa, Argentina, where her mother began to live in a conjugal relationship with a man named Manuel Mora.

Near their home, the Salesians had a girls’ boarding school where Laura began to study. This is where her spiritual formation and human development began. Her main virtues were a spirit of service and availability toward others.

Little by little, she learned about the Faith and began a grace-filled life that led her to love the Eucharist and the Virgin Mary. One day during religion class, one of the sisters spoke about the sin of cohabitation. After hearing this, Laura fainted, because the person she loved most—her mother—was living in mortal sin. Aware of what mortal sin was and how much it offended God, Laura, moved by her love for Jesus Christ and for her mother, decided to offer her life for her mother’s conversion and in reparation for her sins. All this made Laure suffer a great deal; nevertheless, she embraced this new cross. With her gaze fixed on Our Lord, she asked Him to take care of her mother so that she wouldn’t go to hell.

Besides having to see Manuel Mora beat her mother and sister on several occasions—and putting up with beatings herself—, Laura was frequently harassed by him with attempts of sexual assaults. What was her reaction? She lived it all with great courage, protecting what was most precious to her: her purity. Nowadays, purity is often looked down upon. We stain it and give it to anyone, offending Jesus and hurting ourselves. Laura was willing to receive blows until she bled in order to guard her purity. Because of this, Manuel stopped paying for her education. When the sisters found out about the situation, they let her attend the school for free in exchange for her help.

She carried out the tasks entrusted to her with great generosity and dedication. She was especially mindful of the youngest students. These things enriched her soul, and Laura offered them up and did them joyfully and lovingly. One of her most famous quotes is, “For me to pray or to work is the same thing, it is the same to pray or play, pray or sleep. Doing what I have to, I fulfil what God wants of me; and this is my best prayer.” God was present in each moment of her life.

One night when the school was flooded and in a grave situation, Laura devoted herself wholeheartedly to help get the youngest girls out of the cold waters. As a result, Laura contracted an illness in her kidneys, which began to deteriorate.

Seeing her death draw near, Laura did not waste a single moment of her suffering. She offered everything to the Lord for her mother’s conversion. When she was dying, Laura spoke to her mother and told her that she offered herself up for her. Mercedes couldn’t believe that her daughter had given up her life for her salvation. Laura made her promise that she would change and live in the state of grace to be able to go to Heaven. In that moment, a priest administered the sacrament of the Anointing of the Sick to Laura. She received Holy Communion for the last time and then pronounced her last words: “Thank you, Jesus. Thank you, Mary.”

To be like Laura Vicuña is to belong to God. It’s to keep all our senses fixed on Him, knowing that He alone gives us the strength we need to carry the cross, that He alone died for us, and that we can’t continue hurting Him. To be like Laura is to be like Our Blessed Mother. It’s to strive to imitate Our Heavenly Mother and to place ourselves under her mantle, knowing that She is always close to us. It’s to thank God each day for the grace we receive and to know that He loves us. Finally, to be like Laura is to live in such a way that shows our society that it is possible to become a saint, even at such a difficult age.