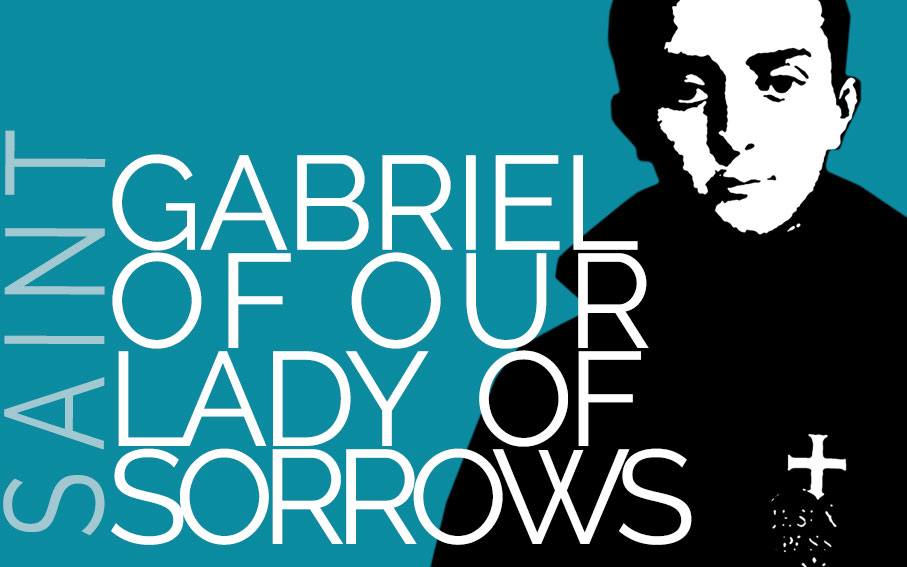 St. Gabriel of Our Lady of Sorrows

St. Gabriel of Our Lady of Sorrows was born March 1, 1838 in Assisi.  He was named Francis, for obvious reasons. His mother and 4 of his 12 siblings passed away by the time he was four. He was raised by his father, Sante, and the household help, Pacifica—and was educated by a private tutor, the Brothers of the Christian Schools, and the Jesuits.

He was joyful, mischievous, energetic, and impetuous. He was easily angered and just as easily cried for forgiveness; at times he gave it his all at school and at other times he could care less. From the time he was little he was great friends with all and showed a special love for the poor.

Francis felt a call to follow Christ more closely in religious life though he seemed to be slow in deciding to follow it. Some think it was because of his love of the social life (theatres, parties, etc.) but his brothers testify that it was his love for his father. His father had lost his wife and 5 children by this time and had given two sons to God in the priesthood and one daughter in marriage. Sante, as is to be expected, did not relish the idea of ‘losing’ another child.

In 1856, during a procession of thanksgiving in honor of Our Lady, Francis received a huge grace. He saw the statue that was being processed around the city, turn to him and say: “What are you doing in the world? Follow your vocation!”

Soon after, in September of the same year, he entered the Passionists and was given the name: Gabriel of Our Lady of Sorrows. He wrote to his family:

With joy, swiftness, and goodwill each day comes to an end. Oh, how pleasant it is to lay one’s self down to rest with the consciousness of having served God (however unworthily) during the whole day!”

St. Gabriel lived only 6 years as a religious before succumbing to tuberculosis just before turning 24.

Religous Orders have the custom of writing a short history of their brothers' or sisters' lives after their deaths. This is the Passionists’ account of St. Gabriel's life written on February 27th, 1862, the same day he died:

This morning at 7:30 am Confrater Gabriel of Our Lady of Sorrows, in the world Francesco Possenti, passed to his eternal reward. He was born in Assisi on 1st March 1838. Vested in the habit of our Congregation on 21st September 1856 and professed on the 22nd of the same month the following year. He died from the disease of tuberculosis.
The life of this delightful youth was a journey of uninterrupted advancement towards perfection. From the moment of his consecration as a religious he applied himself unceasingly to the exercise of virtues without relenting nor meeting any obstacle that he could not overcome nor with doing violence to himself: he engaged himself totally in the fulfilment of his proper duties, he was charitable to all, humble, patient: examining his life one can see examples of all the virtues.
This young man had the gift of never suffering distraction in the course of the recitation of the Divine Office and in prayers. He had a great hunger for the Holy Eucharist and thanksgiving was always on his lips, but the characteristic virtue of the dead was his fervent, solid and efficacious devotion towards Most Holy Mary, and especially towards her sorrows. He would speak always of Most Holy Mary, so great it was to hear him speak of her that many commented on it, and this good Mother repaid such affection to the very end of his life; when assailed with all the attacks of hell he would call on the name of Mary and would be led to triumph.
At the close of his life he received sacramental absolution and asked for his image of the crucifix, to which he had affixed an image of the Sorrowful Mother; he held this to his lips with great emotion and holding the image in his hands, repeated three times the ejaculation ‘Jesus, Mary and Joseph….’ with his eyes fixed towards heaven and in an instant his agony was ended as he breathed forth unto the Lord. In the days before his death he had received the sacraments of Confession, Communion and Extreme Unction, together with all the comforts of religion. We hope that now he is enjoying the prize of his virtues, but nevertheless prescribe all the suffrages required by our Holy Rule.”