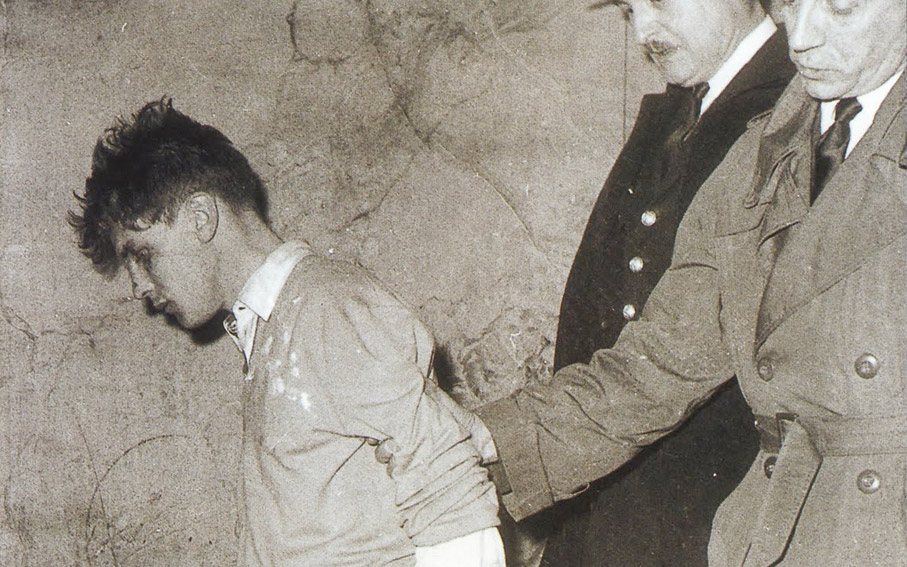 This story seems to come straight out of an Agatha Christie novel. It is not every day that you see a murderer held up as a good example. And even less of becoming a saint. Yet the beautiful thing about God and the Catholic Church is that there is always hope. It is not the fact that he is a murderer that makes him a candidate for beatification, but because he was not afraid to receive God’s love and forgiveness; and not only that, but was also willing to take up the cross of changing his way of acting and thinking in order to become more like Christ. As Pope Francis often says, God never tires of forgiving, we are the ones who get tired of asking for His forgiveness.

Do you know anyone who grew up in a family with money, but lacked love? Or whose parents are divorced? Jacques Fesch, born in France in 1930, went through all of that and more. Do you know anyone who seems to have the gift of throwing away happiness before their life has barely even begun? Jacques left his faith at age 17. When he was only 21, he married his pregnant girlfriend, but later left her for another woman. Jacques had another child with that girlfriend as well.

Do you have a hard time facing reality sometimes? Do you find yourself not wanting to take responsibility for your actions? Jacques’ incapacity to live up to the decisions he had made in his personal life was topped off by the tensions of a mounting debt. And he was only in his early twenties! This may sound like a movie, but Jacques decided to run away to the South Pacific in order to get away from things. His family refused to give him money, so he tried to fix his own problems: Jacques decided to steal the money he needed for the trip. However, his plan backfired and the police got on to his trail. In fear, he reached for the gun he had brought with him and shot a police officer, killing him instantly.

Jacques was caught and sent to jail. He was sentenced to be guillotined. Luckily for him, he was given a lawyer who was a good Samaritan. Paul Baudet tried to help Jacques not only legally, but also to save his soul before his imminent death and to bring him closer to God. At first, Jacques made fun of his lawyer calling him “The Pope”. Yet after much persistence, Jacques had a profound change of heart.

Despite his change, Jacques was found guilty on April 6th, 1957 (his birthday) and in October of that same year he was executed. Jacques Fesch was only 27 years old.

He is now up for beatification.

His whole story is an examination of conscience for any Catholic. Are we like Jacques’ lawyer, ready to help bring a soul to God? Jacques did not seem like someone who would be open to hearing about God. Yet he, too, could change. Are we like Jacques, ready to admit our mistakes and to change, counting on God and His help?

Famous for: Receiving the death penalty after having killed a policeman…and then later converting in prison before his execution thanks to his lawyer.

Loved:To spend his dad´s money, go sailing, car racing, traveling, run away from responsibility…At least at first. Later, he loved Our Lady and he loved to rely on God for everything, always trying to do what pleased Him.

In his own words

I´ll let his letters tell you what really went on deep in his soul.

In a letter to his mother he said, “You are worried about my execution, Mama, but it is nothing in comparison with what awaits sinners in the next world! It is not for me that you should weep, but for sins which offend God. As for me, I am happy. Jesus is calling me to Himself, and great graces have been given me. If you could only taste for just a moment the sweetness of God’s love! And could realize how serious even the slightest offense (against God) is! God must come first, do not forget it. He calls you and believes in you. You are rich in his love. Many souls are linked with yours, and you will have an account to render.

You must go to Christ, without whom you can do nothing. If you seek him, you will find him, but you must seek him with all your heart. I'm always afraid that without realizing it you are seeking yourself rather than God…

Above all, do not seek your own will, but his. Shut out all other thoughts; do not argue. Make your peace with the Church and pray regularly (especially the rosary). Go to Mass on Sundays and receive communion as often as possible.”

“May your love draw down on you God’s mercy, and may he let you see that within your soul a saint is sleeping… You have a large ship to steer. You must set about it courageously, but don't count on yourself, for alone you can do nothing. It is not you who must act but Christ in you. And then you will taste the marvels of divine love, prayers filled with honey, unthinkable delights and ecstasies, and your soul will climb, without you even realizing it, to the summit of love. But for this, you must put self-love to death, and you must pray. Become like the slave of others. Renounce yourself completely. Be like the clay which the divine potter can shape as he wills. The one who abandons himself to God in this way no longer has a heart of flesh in his chest, but a blazing fire. May you, too, experience all this! But don't forget, you have to give everything.”

Like all the saints, Jacques Fesch had a great love for Our Lady. His confidence in the Blessed Mother was so great that just before he knew he was going to the executioner’s block, he wrote in his diary asking for her help and protection.

“I had a wonderful Sunday, one of the best days of my life, spent in continual joy, light, and warmth. It was the Blessed Virgin who showered me with all this, and she did it in honor of the feast of her birthday which was celebrated yesterday.”

“Instead of dying in vain, I can offer my life for all those whom I love! Everything comes back to the love of Jesus … I pray especially to Blessed Virgin, to whom her Son has entrusted my salvation, and no prayers give me such joy, such a spirit of communion, as the Holy Mary and the Hail Holy Queen. We must love her, little brother.”

“Yes, little brother, I want to look neither above nor behind, but to remain in the present moment. I want to hold the Blessed Virgin's hand and never let go of it until she leads me to her Son… The Blessed Virgin protects me, shows me the way I must go and what her Son wants of me. Thus my sufferings are changed into joy, and in order to mitigate the anguish of the last moments, our Mother makes me prefer the other world to this one.”

The last entry in Jacques Fesch´s prison diary is:

“In five hours I will see Jesus.” Not long after, he was executed.

When it will be your last hour, what are going to be the words that come to your head and from the depths of your heart?