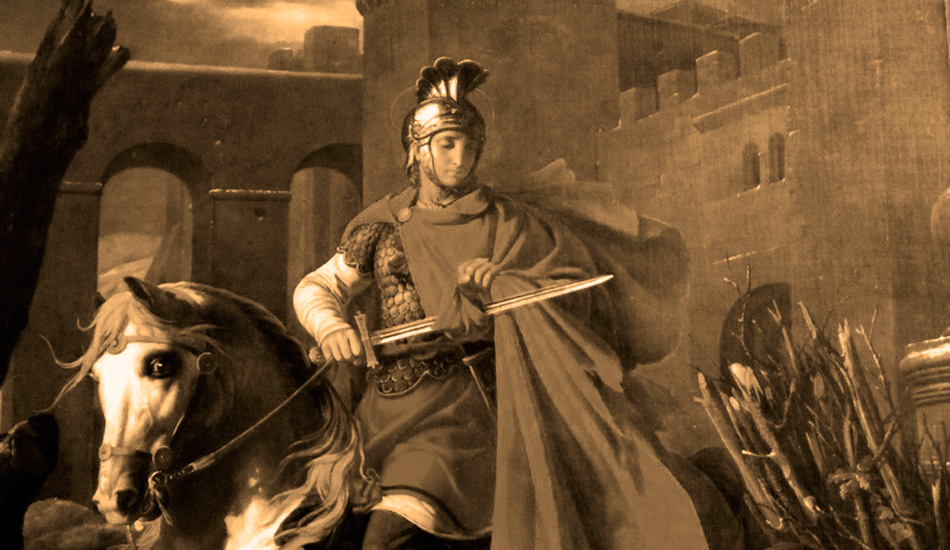 The purpose of the countless testimonies of saints that imitated Christ, the best model we have, is to be the beacons guiding our navigation through the troubled waters of life. Their stories show us numerous ways to cope with misfortunes, crisis and mockery from the perspective of our faith. Their biographies show us the path we are called to follow. It is encouraging to see what normal people like you and me have accomplished. We don’t have to invent anything new and original; we can follow the footsteps the saints have left on the path to sanctity. Specific examples of their lives can be our inspiration and the sacraments and prayer our fuel on this journey. That is why the saints represent such a great treasure for the Church and remembering their lives is of such great importance.

Many aspects of the life of St. Martin de Tours serve as an example for us. We can’t tell with certainty the year he was born 1700 years ago, but it was most likely 316 or 317 in the roman province of Pannania, in today’s Hungary. From early on the young Saint Martin went against the grain giving a testimony of Jesus that spread to those around him, giving us an example of how to act in an environment in which we have to fight for our beliefs.

Son of a veteran soldier and tribune of the Roman Empire, he spent his childhood in Pavia, Italy. He requested the admittance as catechumen at the age of ten without his father’s permission, who, to revert his son’s religious tendency, sent him to fight in the Legion and swear the oath as a soldier when he was 15. In the army the young Martin’s charity and kindness quickly earned him his comrade’s admiration. He didn’t engage in the vices habitual to those in his profession nor mistreat the servant accompanying him: on the contrary, it was Martin who served his servant.

The best known episode in his live took place during this stage of his live when the saint was only 18 years old. The firm conviction and courage he showed already at that age prove to what extent he was full of the Holy Spirit. We can see that in the following excerpt, taken from the chronicle of his life by Sulpicius Severus, his biographer and disciple.

Accordingly, at a certain period, when he had nothing except his arms and his simple military dress, in the middle of winter, a winter which had shown itself more severe than ordinary, so that the extreme cold was proving fatal to many, he happened to meet at the gate of the city of Amiens a poor man destitute of clothing. He was entreating those that passed by to have compassion upon him, but all passed the wretched man without notice, when Martin, that man full of God, recognized that a being to whom others showed no pity, was, in that respect, left to him.

Yet, what should he do? He had nothing except the cloak in which he was clad, for he had already parted with the rest of his garments for similar purposes. Taking, therefore, his sword with which he was girt, he divided his cloak into two equal parts, and gave one part to the poor man, while he again clothed himself with the remainder. Upon this, some of the by-standers laughed, because he was now an unsightly object, and stood out as but partly dressed. Many, however, who were of sounder understanding, groaned deeply because they themselves had done nothing similar. They especially felt this, because, being possessed of more than Martin, they could have clothed the poor man without reducing themselves to nakedness.

In the following night, when Martin had resigned himself to sleep, he had a vision of Christ arrayed in that part of his cloak with which he had clothed the poor man. He contemplated the Lord with the greatest attention, and was told to own as his the robe which he had given. Ere long, he heard Jesus saying with a clear voice to the multitude of angels standing round: "Martin, who is still but a catechumen, clothed me with this robe."

The Lord, truly mindful of his own words (who had said when on earth: "Inasmuch as ye have done these things to one of the least of these, ye have done them unto me,” declared that he himself had been clothed in that poor man; and to confirm the testimony he bore to so good a deed, he condescended to show him himself in that very dress which the poor man had received.

After this vision the saintly man was not puffed up with human glory, but, acknowledging the goodness of God in what had been done, and being now of the age of eighteen years, he hastened to receive baptism.

Saint Martin understood that God had left that poor man to him and didn’t doubt to do what, consequently, was his obligation, without fear of what people might say. Neither the cold he might suffer nor the reprehension he might be object of by his superiors for giving such a bad image of a roman soldier with a damaged uniform stopped him. Seeing how someone cuts his cloak in half to share it with a beggar would call people’s attention nowadays just as much as it did in the episode. But, which of both types of people would we be? Would we be able to imitate Saint Martin’s courage and kindness or would we regret not having done so when it was too late? Thinking of Saint Martin’s dream, whenever we see that a work of charity is needed, will help us to overcome the fear of mocking commentaries and egoism that so often stop us from doing good.

At the age of 20 Saint Martin asked his superior to change the sword for the Word of God and his life turned exemplary, and not only because of his help to the poor. He was a hermit, later named bishop by popular will, founded evangelical communities that were the precursors of the parishes we know today, fought against Satan and widely extended superstitions in the territory of Gaul. Weakened and seeing death close, he even prayed to God He may send him the propitious task with which he could continue being useful.

The life of Saint Martin, just like the one of all the saints, offers many other testimonies and inspirations. This summary doesn’t give him justice, but it has hopefully motivated some of you to find out or meditate more.