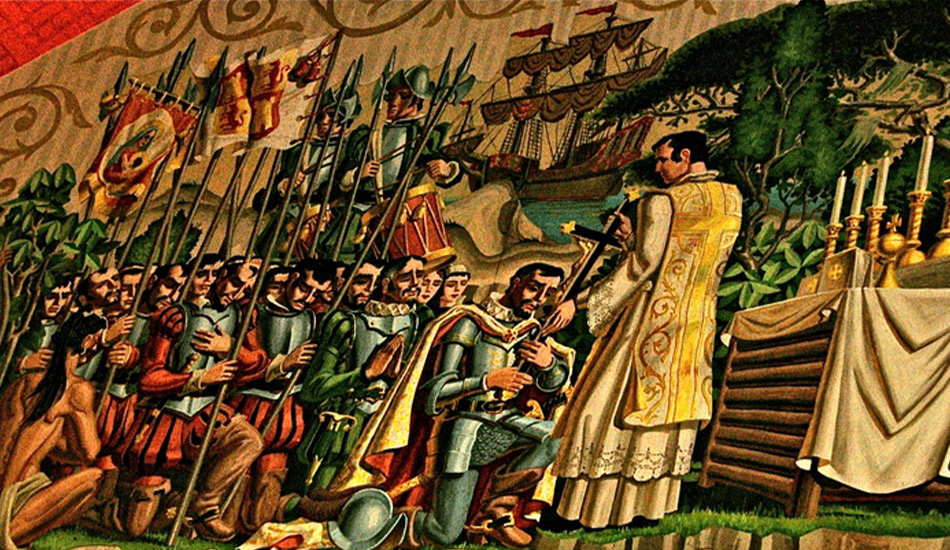 The First Thanksgiving in the USA

If you want to add something interesting to this year’s Thanksgiving conversation, tell your family about the first Thanksgiving in Florida, which took place after a Catholic Mass! Historians such as Michael Gannon and Gifford Waters claim that the first thanksgiving meal in the United States of America took place in St. Augustine, 50 years earlier than what we are told in textbooks.

It was September 8, the Feast of the Nativity of the Blessed Virgin Mary, 1565. The fleet of the first Spanish settlers had just arrived. When the leader of the expedition, Don Pedro Menéndez de Aviles, set his foot on the shores of Florida, Fr. Francisco López held before him a cross, and Menéndez knelt down to kiss it.

They proceeded to celebrate Mass, the first Mass in what is now the United States. Afterwards, Fr. Francisco invited the natives to participate in their community meal. They served the natives with the food they had brought with them on the ship: salted pork, garbanzo beans, bread and red wine. The natives and Spaniards, including Menéndez himself, ate the meal together. They probably also had corn, fresh fish, berries, or beans from their stop in San Juan Puerto Rico.

The word “eucharist,” you should remember from catechism class, actually means thanksgiving in Greek. Listing what you are thankful for with your family is a beautiful tradition, but the best way we can give thanks to God is precisely through the celebration of the Mass. If you don’t already go to daily Mass, consider going to Mass on this Thanksgiving! In the Eucharist, we give thanks to the Lord for creating us, redeeming us, and sanctifying us (CCC 1328). Don’t forget to kneel down for a few minutes when Mass ends to thank the Lord for the Eucharist, the greatest gift Christ has given to the Church. This year, live the holiday in the spirit of the first Thanksgiving: celebrating the Eucharist and being generous towards those around you.