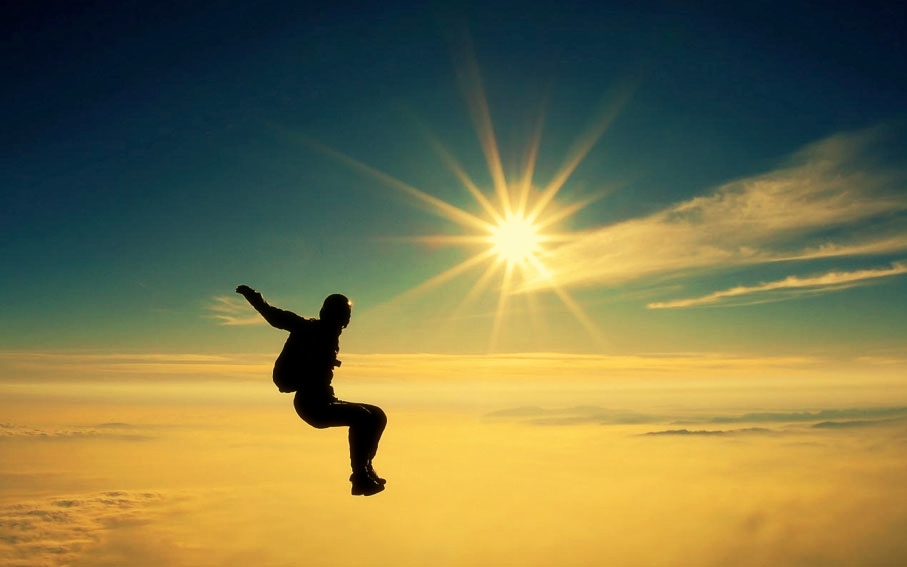 What does skydiving have to do with virtue? Very little. Sorry to disappoint you. However, I personally find something inspiring about the audacity of jumping out of a plane and plummeting towards the ground until the parachute opens and you begin to float peacefully towards the earth (I say audacity and not insanity only because of the use of a quality parachute).

Spiritual childhood, says Pius XI, is to possess by virtue that which children possess by nature, that is, undoubting trust in God, simplicity, and purity. Spiritual adolescence, as Fr. Colum explains in his book “Honey from the Lion’s Carcass,” is to possess as a vice that which adolescents possess by “nature”, that is, immaturity and irresponsibility. Mother Ana, reflecting on the spirituality of the Home of the Mother, suggested another idea: spiritual youth is to possess by virtue that which young people possess by “nature,” that is, audacity and generosity. Not all young people are audacious and generous, just as not all children are simple, and not all adolescents immature. But it is true that if a person is, in some moment of his life, generous, if he at some point is audacious, it's typically when he is young. And if it is later, it is because he has the virtue of spiritual youth.

The moment to do crazy things, to make decisions without counting the costs, to live according to big ideals, to go skydiving, is when you are young.

Let me explain. You can’t just jump out of whatever plane you want, whenever you want, because if the crazy things you want to do are not good, you are not being audacious, you're being dumb; if you make bad decisions without measuring the consequences, you're not generous, you're an idiot; just as if you knowingly jump out of a plane with a defective parachute, you are not spiritually young, you're insane.

Father Juanjo, a colombian priest who converted after having been a satanic gang-member and a womanizer, explains in an interview that when he realized that God existed and wanted him to change his life, he felt like he was on the edge of a cliff and God was asking him to jump off. Why? Because he had to make a radical decision, a decision that seemed crazy to him in that moment, to change his life, to do the will of God, and he had to do so without counting the costs, that is, without thinking about the danger he would put himself in with his gang, without thinking about whether he would be capable of living without five girlfriends at the same time, without thinking about whether he could renounce his satanic obsession. God was asking him to jump off a cliff, and he did it. That’s the type of audacity and generosity I’m talking about: the audacity of the martyrs, the generosity of the saints.

Let’s get down to concrete examples. Maybe you aren’t a gang member or a womanizer, but God can still ask you things that seem crazy and imprudent: Daily prayer. Who does that these days? Modest clothes. Won’t everyone think I’m weird? Daily Rosary. Isn't that’s just for grandmas? Daily Mass. Stop exaggerating— Sunday is more than enough. And to top it off: Vocational discernment. Woah, now you’ve really gone too far. Total consecration to God? A life of service and self-donation? Do you really think I would even consider that?

If you refuse to consider these things when you are young, and supposedly audacious and generous, it won’t get any easier as you grow older. You’ll fall into a routine of the “minimums,” of doing just enough to get to heaven, and nothing more (according to your way of judging the matter, of course), more worried about following rules than about truly loving God and those around you. You might even grow tired of the faith you never understood and never really experienced because you were too worried about your checklist of “minimums”.

Worry more about love than about minimums. Ask God what plane He wants you to jump out of and when to jump. And when He says jump, trust Him. Be young not just in your flesh, but in your spirit.