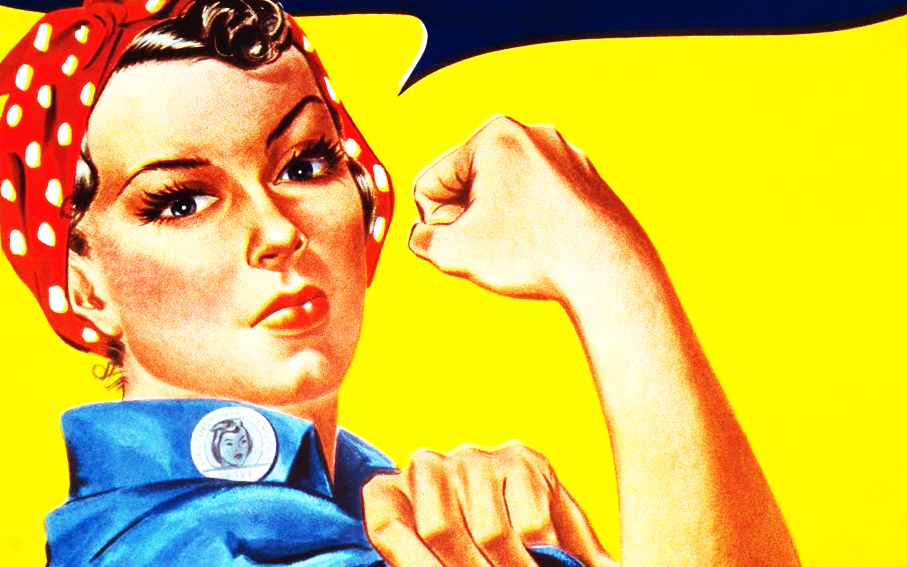 I have never quite understood why modern feminists* chose the terminology they chose to refer to themselves. The suffix “-ist” when referred to an ideology or philosophy that a person professes usually means that the person values or exalts the noun used as the root of the word. For example, one who calls himself a humanist gives prime importance to the value and goodness of humans. A marxist is convinced that Marx’s theories must be applied to bring justice to the world. However, in the present case, in the case of feminists, a strange thing has happened. “Feminists,” in reality, do not exalt the female sex, as one might reasonably suppose, but the male sex: in order for a woman to “fulfill” herself, she must be more like a man. The goal that she must strive to attain is manhood, not physically speaking, but socially and emotionally speaking; anything in the course of history (up to the last century) that had been proper to a woman automatically oppresses her, restrains her, and crushes her as a human being. Why is the classical figure of man the model every woman must imitate in order to realize herself? Why do women have to be men to fulfill their womanhood?

The answer is difficult. Is it an inferiority complex? Men are better than women, therefore women must strive to be men. Is it the obsessive desire for power that has tormented both men and women since the Fall? Men have the power, therefore women must take it all from their hands. Is it a plan to destroy the family? If women dedicate themselves to making money, they’ll be less worried about taking care of their families. Or is it a mixture of all these things? Probably. It would be interesting to study the reasons. But that’s not what concerns me now.

When I read about what the Church has to say about this issue, I realize more and more that the beautiful thing about Catholic doctrine is that it’s not black and white. This makes it beautiful, but also complicated. Let me explain. The Catholic doctrine is not black and white because it is not in agreement with modern feminists (woman must be man to be happy), nor with certain protestants (it is a sin for a woman to have a job). Unfortunately, many catholics are also extremists in one direction or another (in this issue, and more); women either have the vocation of being men (and if so, why have children?) or women have the vocation of being housewives (and if so, why pay college tuition?).

It is important to find that balance. I’m going to look more closely at the “job” issue. A woman doesn’t need to work in the world to fulfill herself. There are, however, many good reasons for a woman to have a job: if she is a consecrated laywoman living in the world, if she sincerely doesn’t know her vocation yet, if she is a mother and her family is in a grave financial struggle, if she is a single mother, if her husband is unemployed, if she can’t have children, if her children are old enough to take care of themselves, and the list goes on. There are also certain jobs that can be integrated more easily into family life because of the schedules, and many mothers see those jobs as a vocation and an opportunity for apostolate.

So what does the Church say, exactly? Women have the right to realize a profession, to be recognized in their equal dignity with men in our society (Letter of Pope John Paul II to Women, 4). And both men and women must participate in the education of their children (Gravissimum educationis, 3). However, the maternal contibution to that education is essential and decisive for the children and for the family (Mulieris dignitatem, 18). The true promotion of woman (I would say, true feminism) demands that her vocation as a mother and educator of her children be clearly recognized in all its value and dignity (Familiaris consortio, 23). As I mentioned, the Church is not fundamentalist, there is nothing “black and white” about these phrases. But the Church does recognize the critical role of a mother in her childrens’ lives. Whether a mother stays at home or gets a job, she must be moved by love, not by an inferiority complex, nor by a sick obsession with “personal success”, nor by a desire to have enough money to satisfy her childrens’ every whim (or her own).

So here is what young women can think about: If you are called to marriage, is there something that disgusts you about the idea of staying home to take care of your children while your husband goes to work? Do you feel insecure about depending on your husband financially? Are you afraid of what your friends will say if you tell them you’re a stay-at-home mom? If so, the anti-feminine feminists have succeeded in your heart. If God blesses your marriage with children, seriously contemplate dedicating yourself totally to their human and spiritual development. The decision of whether you work or not, and when, needs to be made seeking the best for your family, in dialogue with God and also with your family. Meditate the dignity and beauty of the vocation to motherhood.

*I write only about modern feminists. Some feminists legitimately fought for womens' rights.