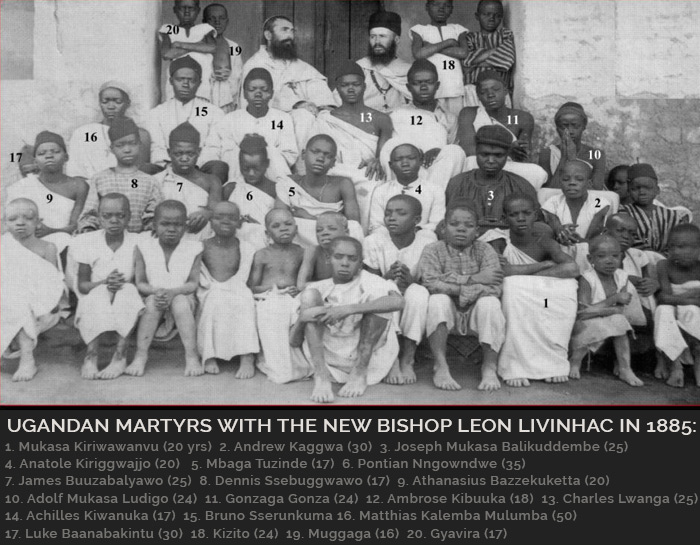 We have girl saints for chastity, but male saints? I recently heard the story of several young men who died for the faith, protecting their chastity against homosexual acts, and I think their story is very applicable to what we are living now. Their names: St. Charles Lwagna and Companions.

It was in the late 1880s in Uganda. The country had recently begun to be evangelized and the local ruler, Mwanga, who had the vice of practicing homosexuality, had two missionaries killed. The head of the palace’s messengers, Joseph Makasa— aged 25 and a recent Catholic convert—reproved the king for the murder and told him that his vice was against God’s law and against human nature. Mwanga, in his rage, sent him to be killed, thus beginning the massacre.

When the other Catholics who worked as messengers in the palace heard the news, instead of fearing for their lives, they were strengthened in courage to prefer death before offending God.

There was a young messenger named Mwafa, whom King Mwanga tried to abuse. The boy told him that his body was a temple of the Holy Spirit and that he was going to protect his chastity, no matter what. King Mwanga demanded that he tell him where he learned that, and upon hearing that it was from another messenger, Denis, sent for him. Denis, aged 17, came and the king asked him, “Are you Christian?” He replied, “Yes, I am Christian and will be unto death!” Upon hearing that, the king thrust a spear in his throat then sent him outside so they would finish him off. That night guards were posted around the grounds so that no one could escape. It was May 25, 1886.

In the meantime, the new head of messengers, Charles Lwanga, 25 (an athlete, known as “the most handsome man in Uganda”), began to teach the other messengers about the sin of homosexual acts. At these words, all the young men were eager to give up their life before giving up their faith or their purity. It was what they needed for what awaited them.

Incited by the king’s consultant, a sorcerer named Katikiro, the king called all the messengers together. He said to them: “From today onward it is illegal to be Christian in my kingdom. Those who stop praying to the God of the Christians, and stop practicing that religion, will be free. Those who decide to continue being Christians will be imprisoned and killed.”

After this, he gave the order: “Those who wish to remain Christian, take a step forward.”

Immediately Charles stepped forward, followed by 14-year-old Kizito, and then 20 more young men, many of which still unbaptized, but who already had the faith rooted in their hearts.

King Mwanga repeated, “Are you determined to remain Christians?”
“Christians until death!” They responded.

They were brought to the prison, and that night those who weren’t baptized yet asked Charles to give them the sacrament. They were in prison seven days while the bonfire—their place of holocaust—was being prepared. On June 3rd, day of the Ascension, they were burned alive. As part of the “ceremony,” Charles Lwanga, singles out for his bravery and encouragement, was taken aside to be burned alone. He gladly helped to prepare the firewood. As the martyrs slowly burned to death, they sang songs to the Lord, eager to see Him soon in heaven.

Fr. Burtin, assigned to the case by the Sacred Congregation for the Causes of the Saints, confirmed that these young men had died for their faith and because they refused to defile their bodies. He recommended that they be declared martyrs of purity.

We ask these young men, now rejoicing in the presence of God, to pray that we be as courageous as them to defend chastity in any way that it may be threatened.