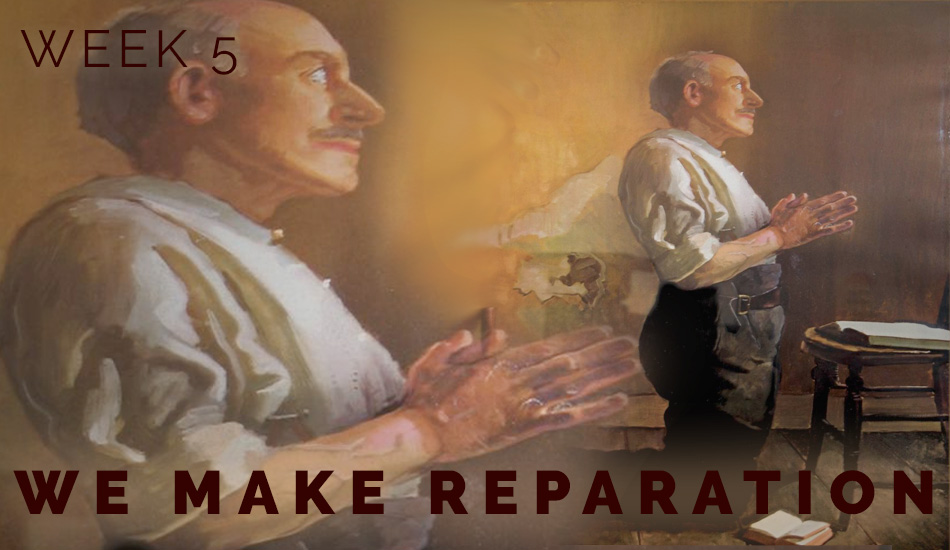 Here are some thoughts for the fifth week of Lent.

“The contemplation of My painful wounds is of great profit to you, and it brings Me great joy.” Jesus said that to St. Faustina. This week, spend your prayer in front of a crucifix, and meditate upon each sorrowful wound. Look how, as we saw before how Jesus makes reparation, how he does so in each wound. As well as being there for love, our sins have put Him there. Take, for example, the crown of thorns. Ask the Lord forgiveness for all of your sinful thoughts. Times when you judged others, you brought up unhelpful memories, spent too much time dreaming about your future, entertained impure thoughts, complained in your mind with no intention to stop… See how the thorns penetrate into his skull, trespassing though the skin, scratching his eyes. The blood dripping down, mixing into his hair, entering into his eyes, drying, and yet still pouring out.

Is this masochistic? Is is too upsetting to think about this? If you loved someone and suffered a lot for them, wouldn’t you want them to know the extent of your love? It’s not masochistic because we don’t end there. Seeing Jesus like this, tell him you’re sorry, ask Him to cover you with His blood, and ask Him, “Why did you do this?” And then, in silence, let Him look at you, and listen.

Venerable Matt Talbot (1856-1925), born in Dublin, Ireland, was the youngest of 12 siblings. Sons of an alcoholic, all his brothers except the oldest, began to drink. When Matt was twelve he began working as a messenger, and then by helping brick-layers. By the time he was 13 he was a heavy drinker. For years all his money was spent on alcohol. He borrowed money, sold his things, and even his boots in order to drink.

One day when he was 28, he waited outside the bar in hopes that one of his “friends” would treat him, and after watching them enter without looking at him, he went home dejected and yet determined to quit, announcing to his mother that he was going to take the “pledge” (abstain from drinking). After renewing the pledge a couple times, he took it for life. Even though it was extremely difficult for him, he found out right away that it would be impossible without help from the sacraments. He went to confession and received communion, and soon began going to daily mass. He began wearing itchy cords and chains around his arms and waist, as penance for his sins as well as symbol of his dedication and service to Our Lady. He returned all the money he borrowed, and began to lead an exemplary life. He read the lives of the saints, did acts of mortification, did the Stations of the Cross and had a great love for Our Lady. Seeing the example of the early Irish saints, he did penance, even waking up at 3am to pray. He gave money to the Church and to religious communities, living an austere life himself, all in reparation for his past sins. When he was 69, walking to Mass on Trinity Sunday, he died.

Look at the life of Matt Talbot, how he began to live his life no longer for his next drink, but rather for God and Our Blessed Mother. He used almsgiving as a way to make up for past sins and help others, seeing that his treasure is not on this earth but in heaven. Why don’t you give some of your money to the Church? And do so in a way that no one else finds out.