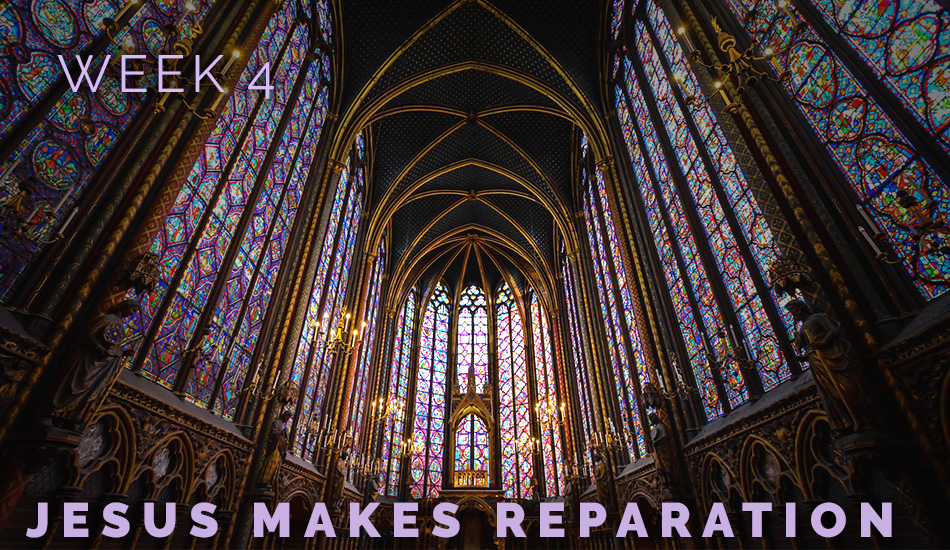 Lent is more than half over! How are you living it?

This week I encourage you to continue meditating on part of the Stations of the Cross. I read recently about the station when Jesus is stripped of his garments. A humiliating action for a man in general, and even more so for one who is the most purest of all. And yet, in doing so, we can see how Jesus makes reparation for all the sins committed against purity. So many sins of people willingly stripping themselves of their modesty, dignity, purity. This is done in the way one dresses as well as one’s own image. Impure gestures and impure jokes. Quickly stripping oneself of their “saintly” image in front of others in order to fit in. Trying to shed off a good upbringing so that others will think you’re someone else. How easy it may be to strip oneself, and yet so difficult to put back on what was so eagerly taken off. In this station, we can see the pain that Jesus feels when he sees how people do that, and yet lovingly makes reparation for it.

FASTING
“I love you, my dear son, with all the tenderness a mother is capable of; but I would infinitely rather see you fall down dead at my feet, than that you should ever commit a mortal sin.” How about that for some sweet words from your mom? Queen Blanche of Castile said that to her son, the young king of France, St. Louis IX (1214-1270).

I don’t think she had to worry too much, because this man was an exemplary son, king, husband, father (of 11), and christian. During that time, it wasn’t common to receive communion unless it was a special feast day, but even so, St. Louis heard mass twice a day and received communion on the six big feasts each year, and on his knees.

You may be familiar with something he had built: the Sainte-Chapelle in Paris. He, like all in that time period, had a great devotion to the relics, and when he was given Christ’s crown of thorns, he had this chapel built to house it. When the relics arrived, it was the king who brought the crown to the chapel, crown aside, barefoot, and dressed like a penitent.

He loved visiting one of the monasteries he had built, and lived as just another monk. But even in his palace, he lived an austere life, one of prayer, fasting, and penance (year round! Not just during Lent!). People complained that he wasted time with Masses and such, and he just said that if he would have spent that same amount of time hunting or playing dice, nothing would be said.

As you can see, this king set an example for all his countrymen. He was not only humble and just to all, but he resembled Christ in John 2:24, “But Jesus would not trust himself to them.” He didn’t care what others thought about him because he knew that before God, he was doing what he had to do.

Last week in the homily a priest we know from Donegal, Ireland, was talking about how God has a sense of humor, and always repays any small deed you may do. He said that there was a parishioner that was helping some poor people fix up their house, and when the priest offered to help, she asked him for a refrigerator. He got the money together and gave it to the lady. That evening, he received from a completely different person a text that said, “If God had a refrigerator, your name would be on it.” Random? Yes. Providential? I’d say so. This week try and see things in a different light—one where you see God’s hand in everything.